In this special Q&A, Red Dress Boutique’s founder and owner Diana Harbour reveals how her company:

Mark Cuban’s questions cut through the air like a scalpel.

It cut through Diana and Josh Harbour’s nine-year backstory of launching a local storefront in Athens, Georgia one year into their marriage. It cut through Red Dress Boutique’s rise from $64K as a retail location to $500K when they launched online to $7.5 million when they entered Shark Tank.

And, unbeknownst to Cuban and 9.13 million viewers, it also cut through Diana’s personal struggles she would only share about years later. “We need $300,000 of it,” Diana answered, “for a new website because we have actually maxed out the capacity of the out-of-the-box system we have.”

“The backend system for our website,” added her husband and Red Dress Boutique co-owner Josh, “is really not giving us good business data at all.”

With a billionaire investor on board and sales on the rise, you’d think pulling together a sparkly new website would be easy. But for the Harbours, it was a long process that eventually culminated in a partnership with Shopify Plus.

When Shark Tank producers caught up with Diana and Josh on an episode of “Beyond the Tank” in 2015, the couple struggled to convince Cuban why they needed a brand-new website.

Cuban and his advisors argued that Red Dress Boutique could save big bucks by improving and rehabbing their existing site, but its founders weren’t so sure. On that show, the pair decided to ignore Cuban’s advice and go forth with the new site.

“It’s going to take you forever to get that right, it’s just the nature of technology,” Cuban said in the special.

“When it comes down to it, that is our call,” Josh responded.

Cuban was right, it did take forever. But that’s because the founders scouted two years for the right enterprise ecommerce platform.

What was your biggest concern in replatforming?

“Creating a new site with ‘wow’ factor. There’s a lot of competition among retail right now, and I wanted to make sure we created something that distinctly set us apart from the competition.”

“It might sound like a small thing, but I love Swatchify. The ability to easily create detailed variants of our most-popular products in true-to-life color is fantastic.”

Why did you choose Shopify Plus?

“I spent two years scouting platforms, looking at reputation, ease of use, customization, and speed. Shopify Plus blew me away in the demo.

“Red Dress Boutique is the only ecommerce site to offer the ability to buy an entire outfit in one easy click with ‘Shop the Look.’ “Shop the Look was born out of my own shopping frustration. I've always spoken about how Red Dress Boutique helps our busy women get a complete look for less because we know how busy she is and how little time she has for herself.

“Shopping for myself, I was spending so much time chasing links for shoes I saw in outfits, then the bag, then the jewelry and so on, that most of the time I would bounce from a site. I wanted to be able to buy an entire look in one page!

“So, I drew it on a piece of paper and showed our developers and several times I was told, ‘No. Can’t be done. It’s going to be too difficult and costly to customize.’ But I do impossible things on a daily basis and the developers did a beautiful job on it!’

What have the results been since replatforming?

“Results have been great! The site is faster and looks a lot better, which is pretty amazing considering we just picked up our site from one platform and dropped it onto another. That could have gone really bad a hundred different ways. How did your test panels react to the new site?

“We pride ourselves on ‘lifting the veil’ for our customers. They know our names, faces, and can reach us in person. We have a VIP group of our 250 ride-or-die customers; they were our trial group and the reason it came out so beautifully.

“After sharing the site design with our VIP customers, we got back PowerPoint presentations of issues, adjustments, and things we hadn’t even thought about. It’s one thing to have it go through developer testing, but your customers can tell you what they want better than any paid firm could!”

Were there any surprising results of the customer trials?

“Surprising results were just little things we missed. Like adding a View Cart button on Shop the Look for desktop or not being able to use the menu on certain devices and browsers.

What sales channels are most lucrative for you?

“We’ve been doing influencer marketing for a while, especially through rewardStyle. When we started with it, we were the first site of our size to partner at that level.

“Social media has been a huge part of our success story. Our Facebook page, advertising, Shopping on Instagram, and Stories that link directly to products have also been a big boost.

“But social media goes way beyond multi-channel ecommerce. Our posts and profiles connect us to our audience in a way few retailers have been able to leverage. Since the beginning, I’ve used content — onsite through blogs and offsite through Facebook in particular — to tell our story, even when it’s a struggle.

On top of that, social is our best source of relationships and insights into our audience’s style and fashion loves.

How much has Shopify Plus reduced costs compared to Magento? “Getting our license, hosting, and CDN from Shopify Plus saved us about $100,000 per year right off the bat compared to Magento. On top of that, Magento was constantly breaking so we had to spend money every month fixing it. We haven’t had to do that with Shopify Plus.”

Do you have any advice on replatforming?

“Be thorough. You don’t want to lose the SEO you have built, your backlinks, orders, or customer history. Make a list and check it five dozen times.

“The Visiture team was involved from the beginning and provided a comprehensive audit and consultation as we moved onto the Shopify Plus platform.

“We took their SEO advice seriously. Especially technical SEO, like …

“Executing on each action item is one of the ingredients that made this platform migration so successful.” The True Cost of Scale

Reducing costs by over $100,000 a year while hitting double-digit growth just months after replatforming could lead you to believe that the price tag for scaling a wildly successful multi-channel fashion brand is minimal.

On the technical front, it’s certainly less than most people assume.

But there’s another cost, a more hidden cost, one that Diana shared candidly about on Red Dress Boutique’ blog three years after her and Josh’s appearance on Shark Tank:

“Shark Tank was torture until the two minutes of my pre-rehearsed intro was over and then I couldn’t shut up about Red Dress Boutique … an hour and a half of diarrhea of the mouth. But it worked.

“My downfall is I am a perfectionist and weak moments are pain points for me. Because they make you vulnerable. But let me be the first to tell you there is no perfection in this world.

“And I have to remind myself that I am perfectly imperfect. Every. Single. Day.”

In the end, “cost” may be the wrong word to describe what it takes to overcome whatever the struggles — like Diana — we all face on the way up.

Bravery, however … bravery is the perfect word. 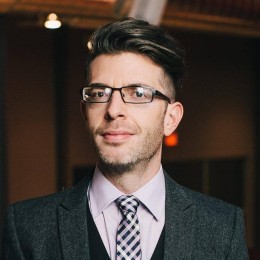 Previously the Editor in Chief of Shopify Plus, Aaron Orendorff is the founder of iconiContent, a strategic agency “saving the world from bad content.” Named by Forbes as one of the top 10 B2B content marketers, his work has appeared on Mashable, Entrepreneur, Business Insider, Fast Company, Inc., Success Magazine, The Next Web, Content Marketing Institute, and more.